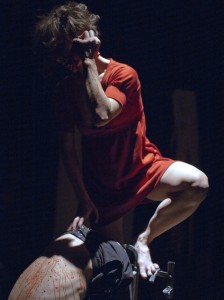 Armine, Sister refers to the history of the Armenian people in Anatolia and their near-extermination at the beginning of the 20th century. The project enters into the history of Europe’s silence and is a refl­ection on the act and inheritance of witnessing.

The project has been realised in both artistic and research fields, which include expeditions, studies of Armenian history and music tradition and work sessions led in the Grotowski Institute in Wroclaw. In the years 2010-2012 the company travelled to Istanbul and to Anatolian cities, Yerevan, and also Jerusalem, and met with choir leaders, chorists, and musicians, some of whom take part in the work on the performance work. Among them is Istanbul-born Aram Kerovpyan, master-singer of the Armenian Cathedral of Paris, who has become the key collaborator in the research. The project focuses on the phenomenon of the Armenian monodic singing tradition and the way it has been preserved or not in diaspora which was largely formed after the First World War as a result of the Armenian Genocide in 1915.

A fundamental change has been taking place in the work of Teatr ZAR. Desiring to build on the ten-year experience of working on polyphonic singing, the group has decided to work with monodic traditions. ­The new vocal training and techniques have required a two-year process of ‘embodiment’. ­The emergant vocal material has been recomposed, harmonised and orchiestrated in order to build a contemporary musical drama.

The poetic sensitivity of the company’s previous work was retained while re-examining the narrative aspect of their theatre. For this new project they have constellated a new international group of performers including Iranian, Armenian and Turkish master singers from Iran, Armenia and Turkey. ­The group kept the musical focus on Armenian liturgical traditions – from Istanbul’s monodic traditions through Ekmalian’s and Komitas’ notated versions of some traditional melodies – complementing them with Eastern singing traditions, including Persian and Kurdish. After a series of expeditions, a studio was established in Wrocław, which has worked year around.

Armine, Sister not only reveals the history of the Armenian extermination, but also the history of silence and the responsibility for it. ­The work explores what it means to be a witness, and what witnessing means to us today. We cannot and do not want to speak on behalf of Armenians, but we wish our performance to break the chord of silence.