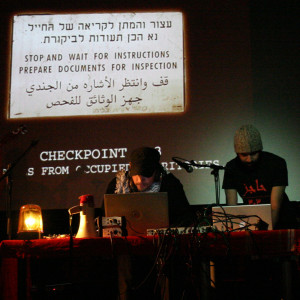 CHECKPOINT 303 [Tunisia/Palestine/France] is an avant-garde activist sound art project that creates experimental electronic music to raise awareness about the struggle of civil society in the Middle East and throughout the Arab world for freedom, peace and justice. Checkpoint 303 combines field recordings performed in Palestine, Tunisia, Syria and Egypt with electronic beats, cinematic FX, oud and soothing oriental tunes.

Checkpoint 303 was invited to open for several Massive Attack shows in the UK and France between 2007 and 2009. Over the last years, Checkpoint 303 has performed electronic and live electro-acoustic sets all over the world (France, Spain, Italy, Sweden, Denmark, Japan, Australia, USA, Canada, Palestine, Tunisia, Chile, Belgium, etc.) spreading the word for freedom and human rights.

Using site recordings predominantly from Palestine and various countries throughout the Arab world, Checkpoint 303 constructs soundscapes live that weave cinematic audio with experimental sound processing and complex rhythms. Through its compositions, collected sounds and noise, Checkpoint 303 spreads a message of peace and a call for the respect of human rights. Contrasting with the mainstream media’s exclusive depiction of violence and suffering in the middle-east, CP-303’s sound collages also report on the heroic hope that subsists in the region as well as the seemingly banal but ever so meaningful little things that embody a daily search for normality in a state of emergency.

Checkpoint 303’s music is available for free download from the collective’s website. Providing the music for free download on a creative commons license basis is part of checkpoint 303 activism and non-commercial vision of the role of art in promoting the civil society’s quest for justice, freedom, tolerance and self-determination.

Origin of the collective
Checkpoint 303 members hail from Tunisia, Palestine and France but collaborate with artists and musicians from many countries.

Origin of the Name
Checkpoint 303 was inspired by the name of a military Checkpoint that separates Bethlehem from Jerusalem, which is known as Checkpoint 300.

Getting the Music
Checkpoint 303 is a non-profit activist project. The music can be downloaded from Checkpoint 303’s website and is also available on Myspace, Facebook, Youtube, Soundcloud, Vimeo, etc. 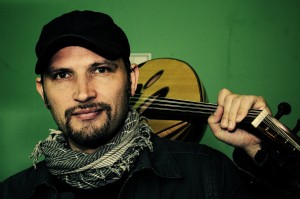