“The double bill made for a strong, albeit slightly traumatic, experience that certainly seemed to capture the Red Zone Festival’s raw and potent energy.”

Mahsa and Marjan Vahdat in an interview with the Lebanese magazine “Noun”. 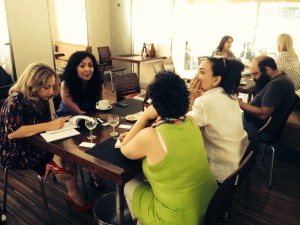 Mahsa and Marjan Vahdat with ensemble gave an enthusiastic audience a wonderful concert in Beirut saturday.

From the exhibition “Tahrir Square” at Redzone in Lebanon, By the Egyptian artist Hany Rashed.
Gallery: The Station, Beirut. May 1st through May 7.

Kate Pendry showed her play “Points of Pain” during Redzone in Beirut on sunday the 4th of May. The play featuring 5 actors including herself, was written with the events in Norway on the 22nd of July 2011 as a backdrop, and it was well received in a city where the population during decades has been forced to see violence as a part of the normality. 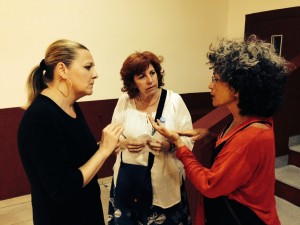 Told by Ahmet Ezzat, board member of Mawred during the show for “Spoken Word” in Cairo on the 3rd of May.